When to elect to proceed to Adjudication or Court under the Security of Payment legislation?

When to elect to proceed to Adjudication or Court under the Security of Payment legislation?

The Robert Frost poem “The Road Not Taken” begins with the despondent protagonist standing at a fork in the road expressing woe in not being able to go down both roads.  A similar fate belies those who use the Building and Construction Industry Security of Payment Act 1999 (NSW) (the SOP Act) to recover progress payments; their choice is between two methods of recovery:

Used properly, the SOP Act is a highly effective tool for contractors, subcontractors, trades, suppliers and others in the construction industry to quickly and cheaply recover payments on an interim basis.  However in practice, this does not always occur.

This article sets out key aspects of the Court of Appeal judgment in Seymour Whyte Constructions Pty Ltd v Ostwald Bros Pty Ltd (in liq) [2019] NSWCA 11, and specifically the limited circumstances in which a claimant may progress the Court Avenue following an unsuccessful attempt at the Adjudication Avenue.

Before a claimant chooses between the Court Avenue and the Adjudication Avenue, it is interesting to note the statistics on adjudications in New South Wales.  On 18 June 2019, Fair Trading reported as follows about the usage of the SOP Act in New South Wales in the quarter of 1 January 2019 to 31 March 2019:[1] 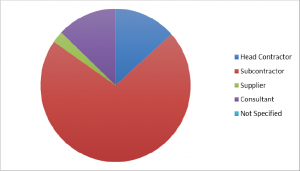 The Murray Report into the National Review of the Security of Payment Laws released in May 2018 concluded that the Security of Payment Act was “unduly complex” and this has discouraged the usage and caused confusion.  The statistics support the findings in the Murray Report as around 10% of those seek to use adjudications under the SOP Act are doing so at maximum efficiency and effectiveness.

A major contributor to this complex area of law is the formidable body of case law that supplements the SOP Act, which is difficult to navigate without legal advice.  A search of the “SOP Act” in legal case databases reveals over 700 results.

Having said that, the statistics on adjudications is not a true indication of the industry usage and effectiveness of the SOP Act, as it ignores the alternative method of recovery – application to Court for a summary judgment.

Sections 15(2)(a) and 16(2)(a) of the SOP Act provide a claimant with two options for recovering a payment.  One option is to proceed with an adjudication application.  An alternative option is to file a claim in a Court of competent jurisdiction to recover the unpaid portion of the claimed amount or the scheduled amount, to which the Respondent must not raise any defence in relation to matters arising under the construction contract, or raise a cross-claim. A claimant can ultimately only recover payment under the SOP Act using one of those options.

In Seymour Whyte, the claimant proceeded with the first option being the Adjudication Avenue, and as an alternative “back-up” position also sought to simultaneously advance the second option, being the Court Avenue.  The claimant did so in circumstances where the respondent alleged that the adjudication application was lodged out of time and hence was invalid.

In Seymour Whyte, The Court of Appeal determined that:

In practice, it is rarely economically feasible for a claimant to proceed with both recovery on both approaches (i.e. a Court Avenue and Adjudication Avenue).  However, if a claimant’s adjudication application and/or subsequent determination is being challenged on the grounds of invalidity by a respondent, the claimant may consider making a forensic decision to proceeding with both options in response to any litigation by the respondent.

Perhaps most importantly, the decision in Seymour White is an example of and a reminder about the extremely high rates of incomplete adjudications in New South Wales which is very alarming.

Claimants looking to use the SOP Act can improve their chances of recovering progress claims by seeking legal advice early on in the process of recovery, particularly when the stakes are high.

If you have any questions about this article of the SOP Act, please call Mark Yum or Nelson Arias-Alvarez on (02) 9324 5300 or get in touch online (below).