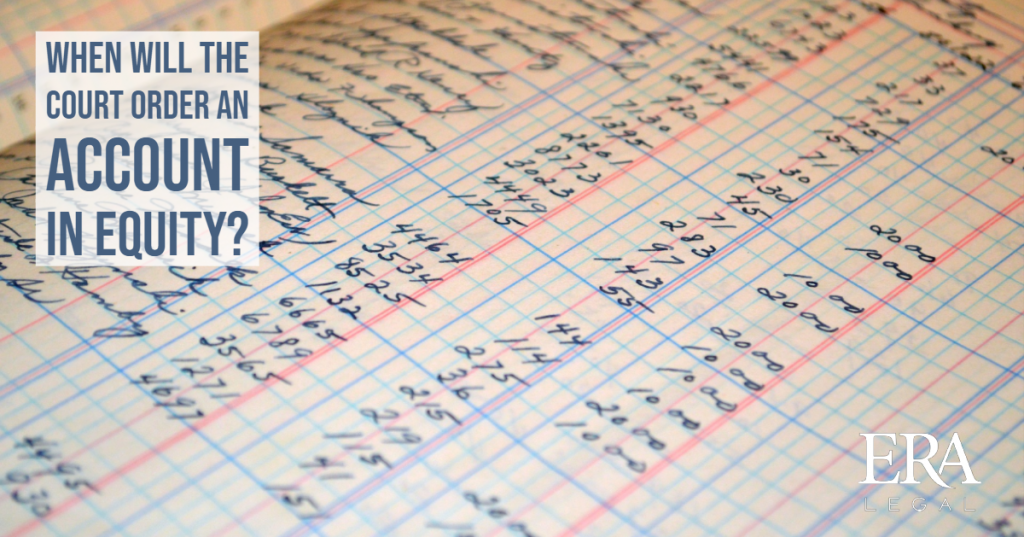 Generally speaking, an account is a procedure to ascertain the monetary dealings of the parties in respect of the subject property and to determine with precision the balance due between them. After the balance is ascertained orders are made as to the rights of the parties to that balance (see for example McLauchlan & ANOR v Price & ANOR [2001] WASC 43).

Expanding on the common law approach, an account in equity provides a broader remedial scope with the modern equitable action having “all but superseded the common law action” (Australian Securities & Investments Commission, in the matter of GDK Financial Solutions Pty Ltd v GDK Financial Solutions Pty Ltd [2006] FCA 1415). In addition, equitable accounts are also available in situations where the common law was unable to grant relief (such as purely equitable wrongs like a breach of trust or breach of fiduciary duty).

The courts have identified two broad categories that govern the basis for accounting in equity. The first of these is known as a general account. This is available when there has been no allegation or wrongdoing and the accounting party merely has to account for what they have actually received or disbursed. The opposing party seeks to challenge the account by asserting:

The second category is an account on the basis of wilful default. Unlike a general account, the second basis of ordering an account requires the party seeking the account to establish misconduct by the accounting party, who must then account for what would have been received if they had not committed the misconduct.

A third category of account may also be ordered in a suit for an account of profit (which necessarily pleads the specific equitable wrongdoing, such as breach of trust breach of duty etc). In those circumstances, a plaintiff is required to plead that the accounting party earned a profit from the specific breach of duty giving rise to the ordering of the account.

In the context of an account between a mortgagor and mortgagee, the following considerations are essential:

If a mortgagor seeks an order for a general account, they must first establish that the mortgagee is an accounting party. One clearly recognised circumstance where this relationship exists is in the context of a mortgagee exercising its power of sale over a secured property. A mortgagee wishing to receive an order for a general account must plead sufficient facts that would justify the making of such an order. Ultimately, these material facts are assessed on a case by case basis, determined by the underlying facts of the case at hand (one example of facts which would justify an account is where a mortgage was registered by fraud).

The Court’s power to order an account between a mortgagor and mortgagee is limited and is only available as ancillary relief to redemption whilst a mortgage subsists. In a redemption suit, the mortgagor must make an offer to pay the amount that is found to be owing upon the taking of an account (the failure to do so being a fundamental deficiency which bars the claim from proceeding). Once a mortgagor offers to redeem the mortgage, an entitlement arises to receive a payout figure from the mortgagee. Accordingly, if the mortgagee fails to provide a breakdown of how this payout figure is calculated, a mortgagor is entitled to an order for an account to ascertain how the figure is calculated. In addition, the Court has the power on the making of an interlocutory application to require the mortgagee to deliver up possession of the secured property pending the determination of the account. The Court will only do so upon payment into Court of an amount sufficient to pay the amount likely to be due to the mortgagee (equally, the Court will not order an account where the mortgagee has possession and no offer to redeem has been made).

The Court will not order an account after the exercise of  a power of sale (the equity of redemption having been extinguished on the discharge of the mortgage). In those circumstances, the mortgagee assumes the role as trustee of any surplus funds (following payment of the debt in respect to its charge and any other encumbrances secured by the property). In those circumstances, the mortgagor’s rights will lie in an action for breach of trust or equitable damages (see for example Ultimate Property Group Pty Ltd v Lord [2004] NSWSC 114).

An order for an account to inquire and report in relation to a relationship between parties is not an end in and of itself. An account is a means to an end (that ultimate end being the vindication of the applicant’s legal or equitable rights). As summarised by the Court in Rowe:

“The requirement that the mortgagor must pay all that is found to be due upon the taking of the account is both the condition upon which, and serves the purpose for which, the equitable remedy is granted.“

An order for an account remains an effective remedy available to mortgagors. Cases such as Rowe demonstrate that even in the broader jurisdiction of equity the Court will not depart from the strict rules identified above. Each case will be determined on its own facts. In those circumstances where a mortgagor seeks an account prior to a mortgagee enforcing their right to a power of sale, unless the mortgage has been registered subject to fraud the Court will not order an account without the mortgagor having pleaded the following: